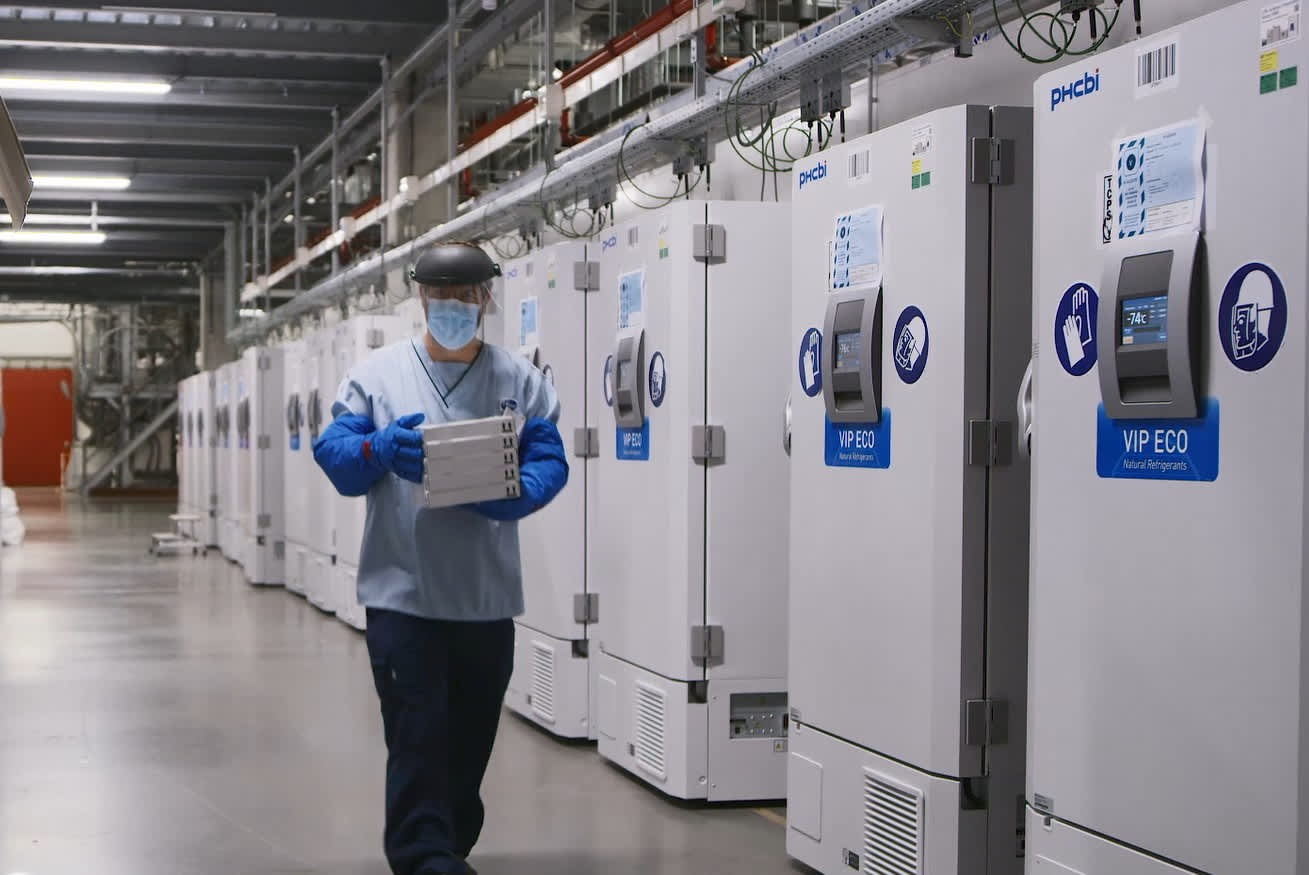 A worker passes a line of freezers holding coronavirus disease (COVID-19) vaccine candidate BNT162b2 at a Pfizer facility in Puurs, Belgium in an undated photograph.

Texas is preparing to start administering the first Covid-19 immunization shots in less than three weeks — as soon as the U.S. Food and Drug Administration grants emergency approval to distribute Pfizer or Moderna’s vaccine.

It’s a gargantuan task for the second-most populated state in the nation. The coronavirus has swept across the Lone Star state after reopening its economy in May. It has confirmed more Covid-19 cases than any other state at roughly 1.2 million and has seen the second-most deaths behind New York, losing more than 21,000 Texans to the virus so far, according to data compiled by Johns Hopkins University. Hospitals in border cities like El Paso have been overwhelmed with cases, even bringing in extra morgue trucks to store the dead.

The state rolled out its vaccine allocation plan Monday, outlining who will get it first. Top priority is going to hospital employees and nursing home staff, EMTs, home health care workers and the state’s most vulnerable residents. Gov. Greg Abbott said the state is prepared to distribute the vaccine as early as Dec. 12.

“We have known months in advance that the vials of the vaccine are already in place,” Texas Gov. Greg Abbott told CNBC. “And those vials are ready to be sent to us the day after the emergency use authorization is provided.”

Every state across the U.S. has submitted plans to the U.S. Centers for Disease Control and Prevention covering how they will store and distribute a coronavirus vaccine.

However, the vaccine won’t be shipped until it wins approval from the FDA for emergency use. Pfizer submitted its application for emergency clearance on Friday, and the FDA is expected to review it when the agency’s Vaccines and Related Biological Products Advisory Committee next meets on Dec. 10. Moderna is expected to submit its application any day. So both vaccines could potentially get reviewed at the same time.

The University of Texas at Austin is preparing to receive doses of a coronavirus vaccine as early as this week — just in case, chief clinical officer of UT Health Dr. Amy Young told staff on Friday, according to an email obtained by CNBC.

“I didn’t expect to get vaccine so soon, frankly,” Young said in an interview. “It’s just about agility right now, frankly, and we may not get our vaccine until later, but we’ll be ready for it whenever we get it.”

The institution cannot receive or begin immunizing healthcare workers until the FDA clears the vaccine, Young said Saturday in a phone interview with CNBC. She’s helping lead the University of Texas’ vaccine distribution effort as vice dean of professional practice at the Dell Medical School in Austin.

“We anticipate that the vaccine that we will be administering will be from Pfizer and that we could receive vaccine as early as the end of next week, but more likely after Thanksgiving,” she said in the email sent Friday to medical school staff and students.

U.S. Health Secretary Alex Azar said Pfizer isn’t allowed to distribute its vaccine until the FDA has authorized it, which could happen in “just a few weeks.”

“If all goes well, we could be distributing vaccine soon after December 10,” Azar said at a press briefing Tuesday. “We believe we can distribute vaccine to all 64 jurisdictions within 24 hours of FDA authorization. Then we hope administration can begin as soon as the product arrives.”

Pfizer is working with Texas, New Mexico, Tennessee and Rhode Island to n a pilot delivery program for its vaccine, which requires ultra-cold storage.

The pilot program, which was announced last week, is designed to work out kinks in the company’s distribution system by transporting vials filled with saline solution before it starts shipping the actual vaccine, said company spokeswoman Kim Bencker.

“No actual vaccine is being released until the FDA issues an authorization or approval (beyond what we have been shipping for clinical trial use),” she told CNBC in an email.

Lara Anton, a spokeswoman for the Texas Department of State Health Services, also said the timing of the vaccine shipments will depend on how quickly the FDA grants an emergency use authorization.

“Our understanding of the EUA process is that the FDA needs to get input from the Vaccines and Related Biological Products Advisory Committee (VRBPAC) prior to issuing an EUA,” she said in a statement. That’s the meeting scheduled for Dec. 10.

Young said the details of its vaccine distribution program at the school are also still being hammered out.

Both Pfizer and Moderna’s vaccines require two doses per person. Young said the university learned last week that it will first receive an allotment of the first doses, with the second allotment of booster shots to follow.

Because the medical school is a research institution, it already has the ultra-cold freezers needed for Pfizer’s vaccine, which needs to be stored at minus 94 degrees Fahrenheit, Young said.

While it’s still being finalized, Young said the university will likely only have one immunization site at the UT Health Austin facilities to make it as simple as possible. That could change as the university receives more doses for a broader part of the population, she said.

It’s unclear how many doses the university will receive for phase one of the vaccination plan, she said, and as such, the university is still figuring out exactly who should be vaccinated first. She said between 2,500 to 5,000 doses “would be what we need in our area, but we’ll see what we get.”

Who gets it first

Emergency care physicians who are treating Covid-19 patients daily and the staff that tests patients for the virus will likely get it first, she said.

The FDA, through its vaccine advisory committee, is charged with reviewing and approving the vaccines for safety and effectiveness while the CDC’s Advisory Committee on Immunization Practices determines who gets the vaccine and in what order since there will be limited supply in the beginning months.

The CDC has recommended in interim guidelines to vaccinate health-care workers first, followed by the elderly, people with underlying health conditions and other essential workers.

Young said the university will follow the CDC’s plan once those details are finalized. Young, who has also treated Covid-19 patients, still isn’t sure when she’ll get the vaccine. She said it depends on how many doses the university receives.

“We won’t know all of the ins and outs about eligibility etc., so we’re waiting for that information, as well, but we want to be poised and ready to administer fairly quickly, as soon as we get the vaccine,” she said. “What we hope to do is take the lessons learned from this first phase of healthcare providers to inform our processes across campus as we bring on other phases.”