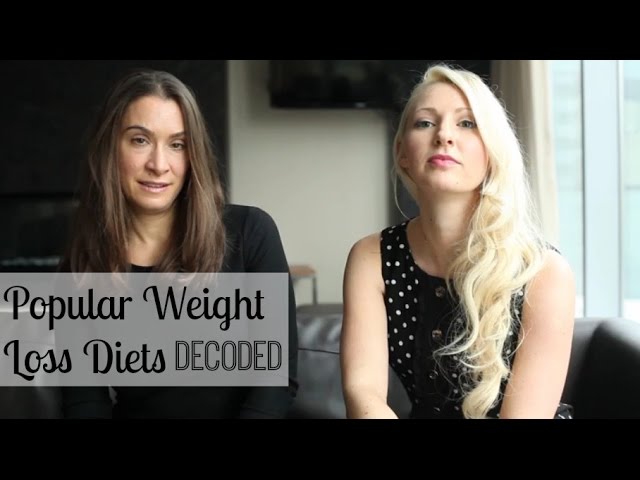 Weight Loss Meals
Share on Facebook
Share on Twitter
Share on Pinterest
Share on LinkedIn
In this video Registered Dietitian Abbey Sharp brings on a special guest, Abby Langer, who is not only a Registered Dietitian in Toronto as well but also shares the same first name. Together this dynamic duo review popular weight loss diets we have all heard of and many of us even tried.

The first diet on the review chopping block is known as “The Raw Diet”. You have all heard of this and it is touted heavily by Vegans worldwide as the go-to way to stay thin and healthy. It is a diet that consists only of raw fruits, raw vegetables, and grains. None of this food can be cooked prior to consumption. Abbey Sharp actually compares this diet to eating paper towels. Both dietitians agree that the only reason this diet would work is that you are cutting out so many great tasting foods, and the delicious flavors that come from cooking them, that you will lose interest in eating altogether. It would become more of a chore than an enjoyable part of your day. They also discuss processed foods verses altered processed foods mentioning specifically that you want to limit your intake of altered processed foods. In all actuality we have gained a lot of benefits from processed foods over the years, a prime example being pasteurized milk. Pasteurization kills harmful organisms that are responsible for diseases like typhoid fever, tuberculosis, and diphtheria just to name a few.

The second popular weight loss diet reviewed is “The Butter Coffee Diet”. This consists of a breakfast smoothie made with coffee, butter, and oil that is intended to be a meal replacement that is supposedly frothy and delicious. In the past both dietitians have written about the unhealthy nature of this diet and both strongly oppose it. They believe it is a marketing ploy to sell a specific brand of coffee. In fact the person who actually created the diet has no scientific or nutrition background whatsoever. People who have tried the diet claim to feel really full afterwards, which makes sense considering the smoothie has a whopping 600 calories in it, that’s a massive amount of calories for a breakfast. Abby Langer suggests that you may as well be eating a chunk of Crisco. Yes, it’s actually that unhealthy of a diet. The popularity of this weight loss diet is believed to come from how good it’s supposed to taste.

The next diet, and the third one reviewed, is “The Alkaline Diet”. An alakaline diet emphasizes alkaline foods such as whole fruits and vegetables, as well as certain whole grains, all of which are low in calories. As Abbey Sharp relays in no uncertain terms, and has done so in past videos, we have our own PH balancing mechanism that operates perfectly well on it’s own without the need for us to strictly adhere to a high alkaline diet. If our bodies were not capable of regulating our alkalinity levels we would become internally toxic and actually die. Something as simple as drinking a can of Coke or eating an orange would literally do you in if you’re body wasn’t capable of maintaining a proper PH on it’s own. People have also been led astray by mass marketing efforts that would have us all believe that cancer thrives in an acidic environment and by eating acidic foods we are creating a perfect environment for it to live in. Both Abbey Sharp and Abby Langer are in complete agreement that this is simply not how the body works. The theory behind why these type of diets may be effective for some people is because they are so restrictive. If you starve your body of calories you are going to lose weight, but you run the risk of losing the wrong kind of weight. Also, both dietitians seem to take major issue with the fact that this diet completely disallows cake. No cake whatsoever allowed. Why would you ever want to give up eating something as delicious as cake?

The fourth, and final diet reviewed is “The Cayenne Cleanse”. This is a modified juice fast that substitutes food for lemon water made with maple syrup and cayenne pepper. This is one of the most prevalent cleanses and is considered in many circles to not only make you lose weight but to also get rid of bloating, inflammation, and even make you more clear headed. Again, starving your body of the nutrients it needs is not going to make you more healthy, period. If you lose weight from this diet it’s because you are consuming practically nothing on a daily basis. Any additional effects you feel from it are placebo effects that you are expecting based on what you have heard or read.

For more tips on staying healthy, recipes, dieting, and information fit for consumption by foodies everywhere stop by Abbey’s blog, and by all means don’t forget to subscribe to the YouTube channel.