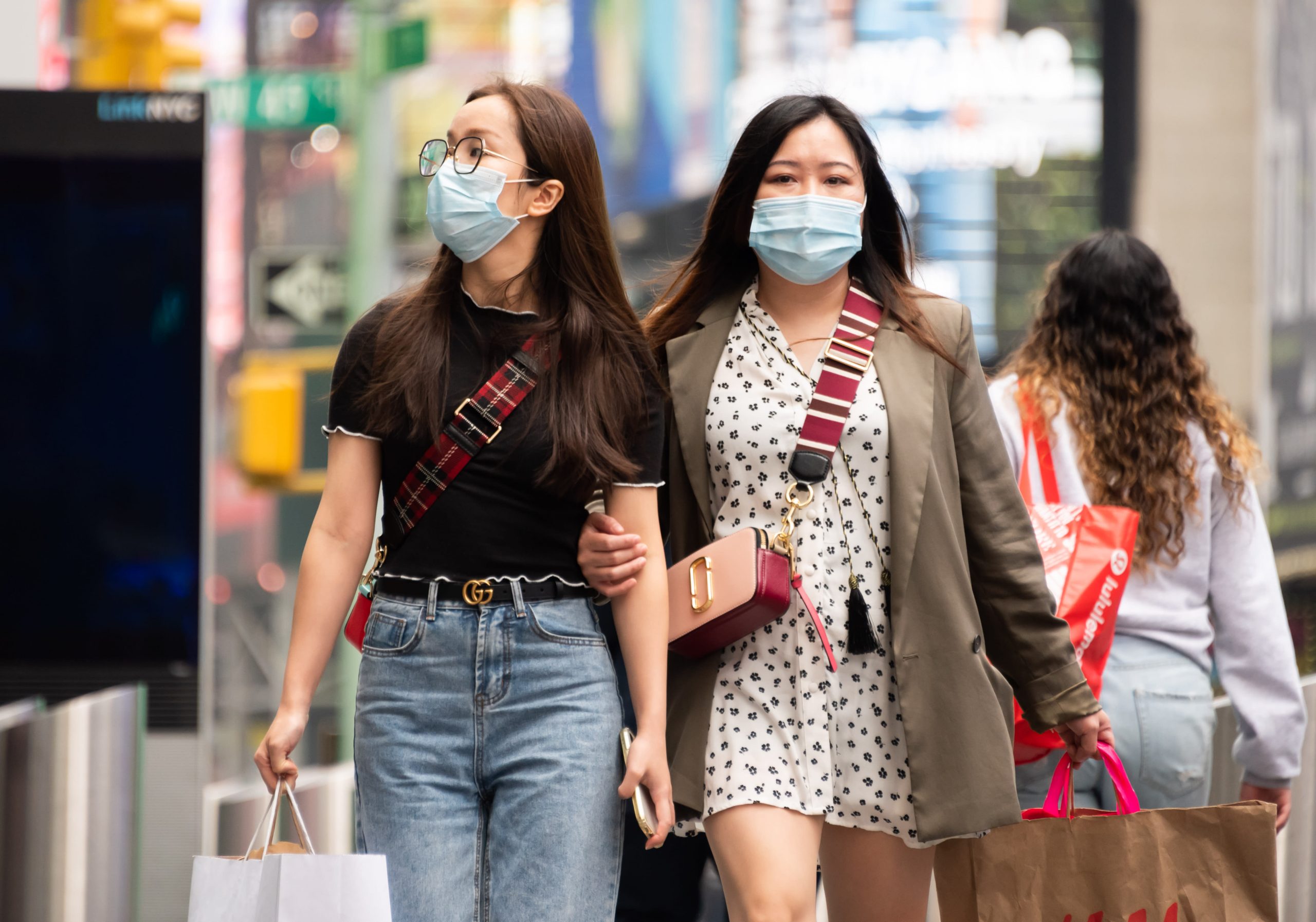 People wear face masks in Times Square as the city continues the re-opening efforts following restrictions imposed to slow the spread of coronavirus on October 22, 2020 in New York City.

Mandy Elmore, 47, has been wearing masks for more than 20 years. That’s because she has cystic fibrosis, a hereditary disease that affects her lungs and digestive system.

Because of her illness, a cold or flu can land her in the hospital. Prior to the pandemic, Elmore, who lives in Dallas, Texas, had to stop going to church or traveling on planes to avoid strangers coughing and sneezing directly on her.

“Masks offer freedom for those of us who are sick,” she said. “I would feel comfortable going to church in the winter or to movies or to birthday parties if people could think about those like me who truly suffer as a result of a simple cold virus.”

For millions of Americans like Elmore, it would change their lives for the better if it became more of a cultural norm in the U.S. for people to wear masks when they’re under the weather or in crowded areas. The West has stigmatized mask-wearing, but in countries like Japan or South Korea, residents might get dirty looks if they hop on a subway with a sniffle and no mask.

Still, there’s reason for skepticism. Not everyone in America is wearing masks, even now, when public health officials are strongly encouraging them to do so. Rallies to protest masks have popped up across the country, with many Americans pointing out that it’s a violation of their personal freedoms.

But for others, who potentially represent a less vocal majority, it could become the new normal. Since the start of the pandemic, many people bought a handful of masks for the first time and have gotten used to wearing them in public. Doctors and public health experts believe that American culture could fundamentally shift to embrace new hygiene practices.

“I think we do need a new culture of masks, at least any time not feeling well, and I think masks are in and handshakes out for the indefinite future,” said Dr. Tom Frieden, the former director of the C.D.C. during the Obama Administration and the president of global health initiative Resolve to Save Lives.

“Post pandemic, there will be new social norms,” added Dr. Panagis Galiatsatos, a pulmonary and critical care doctor, who treats patients with chronic respiratory conditions like COPD and cystic fibrosis, as well as Covid-19.

“I think face masks will continue to be used by the general public in times when they don’t feel well, and honestly we’re realizing that no one feels slighted without a handshake,” he said.

Sometimes, it takes a pandemic to change behavior. Across East Asia, mask wearing really took off in the aftermath of the SARS outbreak in 2003. The U.S. was largely spared from SARS. But in Hong Kong, where more than 280 people died, there was widespread panic. All of that led to many countries developing practices around how to tamp down on potential disease outbreaks early, with measures like social distancing, travel bans, and masks.

Almost two decades later, this advanced planning gave the region an edge when it came to Covid-19. Many people already had a mask or two at home and had become used to wearing one. In countries like Taiwan, those who did not wear a mask were occasionally even publicly shamed on social media for failing to take proper precautions.

William Hsiao, emeritus professor of economics in the Department of Health Policy and Management at the Harvard T.H. Chan School of Public Health, told CNBC that in these cultures, there’s a strong feeling that sometimes people have to sacrifice their “individual desires and benefits” for the sake of their community. That helped countries like Taiwan and Vietnam, which have experienced relatively few cases of Covid-19, come together to face a threat in a more unified way. In Taiwan, only 7 people have died from the virus, while Vietnam has reported just 35 deaths.

In the West, it hasn’t been as easy to disseminate public health measures. Not all Americans have eagerly embraced mask-wearing, even in the height of the pandemic. Research organizations like Brookings say that “a culture of individualism” is an obstacle. Americans aren’t as used to putting the needs of the community ahead of themselves.

Still, some Americans say their perspective has fundamentally shifted. Rather than powering through illness by going to school or work as normal, they say they’d take extra precautions or stay home. And some say that they’d be comfortable wearing a mask in a crowded setting from now on.

“I grew up going to school, even if I was sick” said Spencer Guthrie, 45, from San Francisco. “I never missed a single day of school from K-12.”

But Guthrie said his views have changed since the start of the pandemic. He would take greater precautions now if he felt under the weather. “Masks are not the slightest bit inconvenient for long periods of time if you find one that fits well,” he said.

Others say they discovered unexpected benefits to wearing a mask. Hope King, a New York-based journalist, has found comfort in that moment on the street when people pull their mask up as they approach. She sees it as a sign of respect.

King has experienced the rise of anti-Asian racism during the pandemic. So wearing a mask makes her feel safer.

“I think maybe you can’t tell immediately that I’m Asian from far away, especially if I’m wearing glasses,” she said.

King envisions keeping her mask on as long as people around her continue to do so. She also plans to wear one if she starts to feel sick, as a signal to others that she’s invested in protecting them.

For some young Americans, wearing a mask just isn’t big deal. Gurdane Bhutani, 29, suspects that face coverings won’t be perceived as a “strange thing to do” in the future at times when people are packed together. He already refrains from eating peanuts on an airplane in case someone has an allergy. So a mask doesn’t seem any different.

“It’s not hard to do, and it could make a difference for someone else,” he said. “I know people with autoimmune conditions are feeling really relieved that everyone is wearing masks now.”

‘Drawn into their world’

Doctors like Krishna Komanduri, chief of the division of transplantation and cellular therapy at the University of Miami, has noticed an increased empathy for immunocompromised patients in recent months. People with weakened immune systems have long feared getting sick — and that prospect is never far from their thoughts.

And now, with Covid-19, even young and healthy people are concerned about avoiding germs and spreading illness.

“For our cancer patients, nothing has really changed,” he said. “Rather we have been drawn into their world.”

Cancer patients, he said, or really anyone with a compromised immune system, are no strangers to masks and social distancing. Some received strange looks prior to the pandemic, he said. But not anymore. “More widespread adoption of these measures would be good in general,” he explained.

For her part, Elmore, who suffers from cystic fibrosis, has never felt safer. And ironically, that’s during a respiratory pandemic.

“Now, if someone coughs or sneezes with a mask on in the store, I’m not trying to run to get away,” she said. “Pre-Covid, I would literally breathe out and walk as fast as possible to get away from the airflow.”

Elmore said her entire family would keep their ears alerted for any hint of sickness at a time when very few people wore masks. “My husband used to say, ‘cougher on the left,’ to prevent me from breathing as they walked by,” she said.

Elmore isn’t expecting that everyone will wear masks at all times in the future. She is hoping that people will take more precautions, however, when they start feeling sick. “I do hope those that are having symptoms will consider them,” she said.