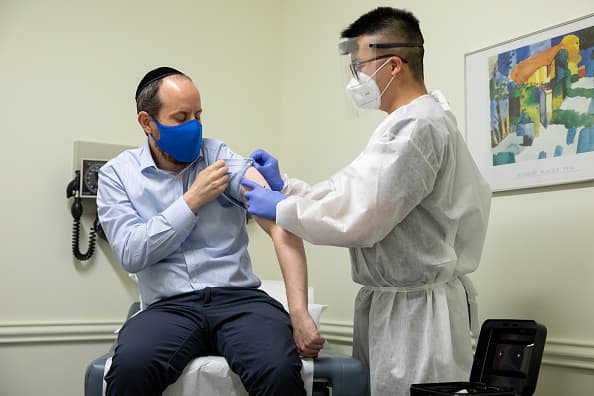 Rabbi Shmuel Herzfeld has his arm disinfected by Dr. Chao Wang during a clinical trial for a Coronavirus vaccine at Meridian Clinical Research in Rockville, Maryland on Monday, July 27, 2020. The Coronavirus vaccine was created by the biopharmaceutical company Moderna.

The National Academies of Sciences, Engineering, and Medicine released a draft report that lays out a federal plan for distributing a coronavirus vaccine in the U.S. if and when one is approved for public use. The vaccine would be distributed in four phases with health-care workers and vulnerable Americans, such as the elderly and those with underlying health conditions, getting it first.

The group said it expects all volunteers participating in U.S. vaccine trials to get an approved vaccination early on regardless of its phased guidelines, as “doing so is a typical standard of vaccine trial protocol.” It said the Trump administration’s Operation Warp Speed expects to support up to seven 30,000-person phase three trials and it assumes four of them will fail.

“Four of the trials will fail, and all subjects in those trials are offered access to an approved vaccine,” the group wrote in the draft report. “Three of the trials will succeed, and, under a 1:1 ratio between members of treatment groups compared to the placebo group, 15,000 participants from each of those trials who were assigned to the placebo condition are offered and approved vaccine.”

According to a study published in the scientific journal Biostatistics, vaccines for infectious diseases have a 33.4% success rate of making it through clinical trials and to regulatory approval.

In phase three trials, vaccines are generally given to thousands of people and tested for efficacy and safety, according to the Centers for Disease Control and Prevention.

The U.S., as part of Operation Warp Speed, has already invested billions of dollars in six potential vaccines as of last month, including from drug companies Pfizer, Moderna and AstraZeneca, which have all entered phase three trials.

Some vaccine candidates are being manufactured before regulatory approval. Because of the pandemic, U.S. health officials have been accelerating the development of vaccine candidates by investing in multiple stages of research even though doing so could be for naught if the vaccine ends up not being effective or safe.

U.S. health officials have said they are optimistic they will find at least one safe and effective vaccine by the end of the year and possibly more than one by early 2021.

While there is hope scientists will find a safe and effective vaccine, there is never a guarantee, scientists say. They warn that questions remain about how the human body responds once it’s been infected with the virus.

For example, scientists expect that antibodies provide some degree of protection against getting Covid-19, but they can’t say that definitively yet since the coronavirus was first discovered about eight months ago.

Hong Kong researchers reported last month what appears to be the first confirmed case of Covid-19 reinfection, a man who was first infected by the virus in late March and then, 4½ months later, seemingly contracted the virus again.