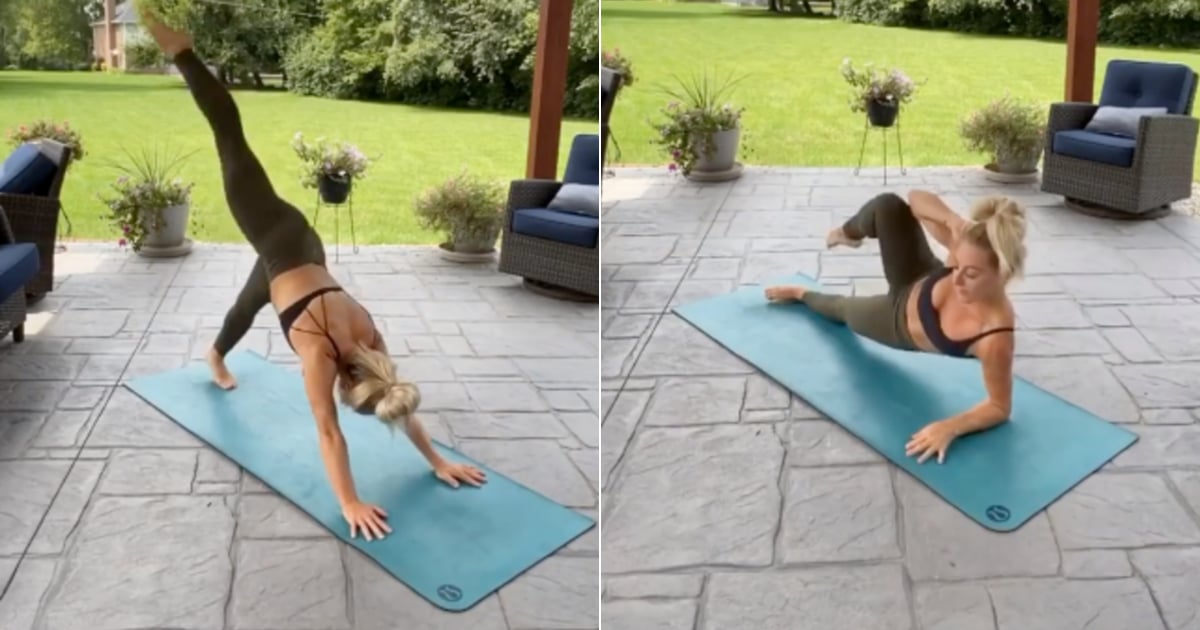 I knew the four bodyweight moves Olympic gymnast Samantha Peszek shared on Instagram were going to be challenging but great for targeting the core — after all, I tried her former teammate’s ab routine last year, and it ignited my midsection big time. Peszek, who was a member of the US women’s Olympic gymnastics team in 2008 that won silver and who went on to compete for UCLA, said these creative plank exercises will “up your ab game.”

The four moves that Peszek shared were: “plank twist jumps,” which are similar to a plank-to-pike jump but you’re twisting to the side and tucking your knees in; “plank kick to side,” like kick-throughs but in a plank position; “plank knee-in kickback,” similar to a Three-Legged Dog yoga pose with a crunch; and a “side plank elbow to knee, fingers to toes,” a side elbow plank with an oblique crunch and a toe touch. Watch Peszek demonstrate the moves above.

As a longtime gymnast, I recognized her gymnastics-acquired form (pointed toes and flexibility), and I appreciated the exercises that resembled some of the moves I used to do at the end of my practices for conditioning, especially the last two. Due to the fact that Peszek didn’t include any instructions for how many reps and sets to do, based on what she shared in an earlier workout with the same moves — and based on what I thought my body could handle after the weighted 25-minute full-body home workout I did — I completed 10 reps of each exercise for a total of three rounds. It looked like this:

Aside from working the obliques, six-pack muscles (rectus abdominis), and deep core, the ab circuit was a sneaky arm burn because of the plank work. It was harder than I anticipated (I admittedly wanted to push through for four rounds but was too tired). The last two moves — the ones that I said brought me back to my gymnastics days — were the hardest out of the four exercises, though they also happened to be my favorites (no surprise there!).

I would call this an advanced ab circuit. I recommend doing a modified side plank with your bottom knee down for the last move if you can’t hold yourself up in a full side plank while doing the added oblique crunch and toe touch. I also suggest only going as far as you can into Three-Legged Dog for plank knee-in kickback if you aren’t quite there in your flexibility. Additionally, I’d modify the rounds and reps depending on what’s comfortable for your fitness level.

The circuit shows you can do so much more than just holding an elbow or regular plank, and bodyweight exercises are by no means easy! I, for one, plan on doing this as an ab burnout in the future (aiming to complete four rounds!), and I could see myself incorporating those last two moves specifically into my workouts from now on. Peszek knows her core workouts!